Banos, what a place. My time here, short and sweet though. Banos is a small town around 4 hours away from capital Quito, Ecuador. It is surrounded by incredible mountain scenery, a volcano that has been smoking consistently for 2 years and full of shops, bars and restaurants. People come here for though, is for the activities and natural wonders they can experience. It has waterfalls, rafting, public hot baths, cannoying, bunje jumping, the works.

I came here to do something I had never done before. Paragliding, randomly, just hit me and suddenly I became interested in doing it. I had never done it before, nor lack experience in air like activities, so concerns and worries were obviously there. But I felt comfortable, and felt that if the guide was doing his job, there would be nothing to worry about. Plus the views would be amazing. So i signed up with a couple girls I knew from being on the same route as whilst here, in South America.

That morning, I visited the famous Casa Del Arbol. A swing that is bigger than most of your everyday park swings, however this is balance on a tree, that looks over hills and mountain sides. It swings out and looks as though you are swinging over the middle of a valley. The pictures, if I’m honest, do it more justice than it actually is. However, it is fun. You won’t have been on a swing like it. It swings our over a steep hill that gives you the best in motion views of clouds, mountain drops and land. How much for this? A mere, 50c.

So after swinging the morning at Casa Del Arbol, Paragliding was next. We actually got confused with Handgliding, until I did some research. Basically, Paragliding is being attached to a Parachute and gliding in the air, by an instructor. We done some safety and demonstration techniques prior to arriving at the flight spot, how to run and take off. I was stoked and really excited to get in the air. 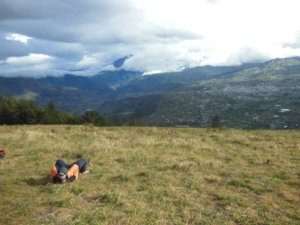 We got to the flight spot, the wind wasn’t exactly playing ball, and we had to wait about 30-40 minutes for the winds to slow down. The anticipation was the worst to be honest. When the first guy went up, he went so high it had me thinking twice about doing it. I felt he was that high if a plane was nearby surely he’d me in parallel with its height. And all on a flimsy parachute? I was 4th to go up, and it happened so quick. At first, I struggled to run off at first, the weight of the parachute and unexpectedness got to me, but we managed to run off the short mountain slide and get floating in the air. 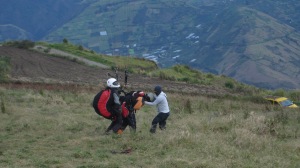 After a few minutes of struggling to pull back and lie into my seat, we managed to get comfortable. When you hit in the air, you need to pull on two straps and lean back, and then your seat unfolds out from underneath you. All in the rush of it all, the confusion of being in the air, naturally things like that can take a little longer. After that, it was a fairly tranquil experience, apart from some sharp turns. We followed Eagles soaring in the air, took numerous selfies, floated over huge drops, valleys, over tree’s, dipping and diving. It was one of them things that you feel free. An awesome experience. The volcano backdrop in the distance, Banos town just looking up at your from natural terraces to all the houses, to natural landscapes – everything was there, you were looking down and around and just admiring life. 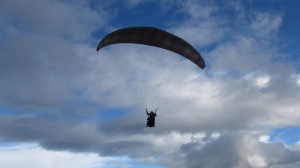 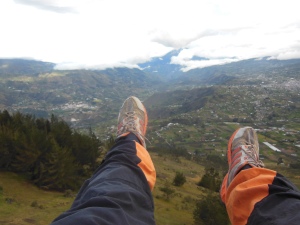 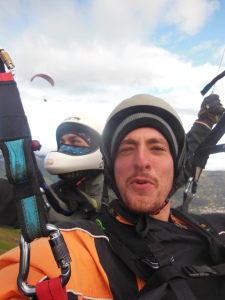