The Amazon. A childhood dream. The thought of being one with nature surrounded by natural habitats and tropical wildlife has always been something I have needed to experience. Even before doing this tour, through the Pampas, I know it won’t be the last time for me in Amazon. I feel I have unfinished business with it. My dream of the Amazon has always been the rainforest. Being submerged into the jungle, surrounded by the echoes of monkeys, exotic birds and colourful frogs. With rives and waterfalls creating that peaceful feeling in my head. The glorious green plants and trees breathing oxygen and the humidity making me sweat buckets. That’s the dream for me. That’s life. Away from all the concrete jungles of the world. 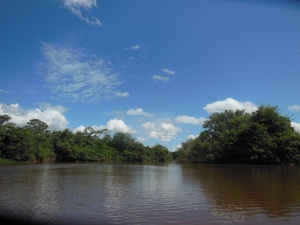 Pampas was a little different. Dominated by brown rivers and flat swamp lands, it was going to be my first time heading here. Yet, full of insane living wildlife. Going via Bolivia, apparently its the cheapest to go via. Also, you see more animals and species at hand. The Amazon is huge, and takes up most of the centre of South America. You can visit via Brazil, Guyana, Venezuela, Peru, Colombia, Ecuador also. To take a trip from La Paz, Bolivia, I flew on a chartered flight again, over the ice glacier mountains and to lower grounds that 3000m high La Paz, to Rurrenbaque. Rurrenbaque, a peaceful vibe town with all tourism shops was lovely, it had a breeze from the lake beside it, and was small. It wasn’t full of hecklers or salesman, it was local people living, each to their own, minding there own business.

Heading to Santa Rosa 3 hours in cars, followed by a lunch break and then into a canoe motorized boat. We drifted down the murky lakes for 3 hours spotting many wildlife. We found tons of Caiman, Alligator like species but not as aggressive. We saw Spider Monkeys who were friendly and curious of our arrival. Hoards of birds, the biggest I’ve ever seen before just floating around the rivers waiting for the opportunity for their lunch out of the water. We saw Capybaras’, giant guineas pigs, bigger than the average size of a dog. They squealed and sniffed in curiosity. The sun was beaming down on our skin intensely, with no real shadow from the trees. 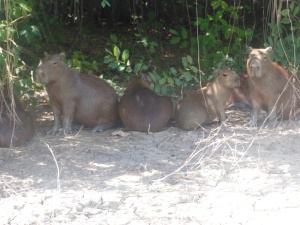 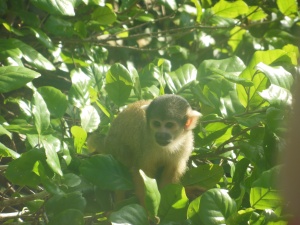 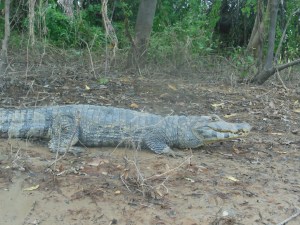 We arrived at our accommodation huts for the nights, ate dinner and watched the sunset go down. That night, the first, we went out for an hour on boats when dark, with flashlights and the thousands of stars lighting up the skies. It was peaceful, almost like a Zen experience. We were hunting for Caiman eyes, as with the reflection of light, will be different colours depending on their type. An orange Sapphire glow would peak out of the waters ahead and to the side of us, like the eye on the Lord of the Rings shone throughout the mountains. A beautiful colour yet eerie at the same time too. With the glow of the flashlight, you could see to the naked eye of how many insects flutter around at night. Thousands attracted to the light on their own crazed journey. Getting in and out of each others way. The black caiman would have red eyes, these were the bigger more aggressive types of Caiman, the daddy’s, the hunters. We managed to se a couple which was something we had hoped for. Just being in the dark with the stars shining above us was something that was special, another element of our briefly connection with the world again. A natural bond reunited. 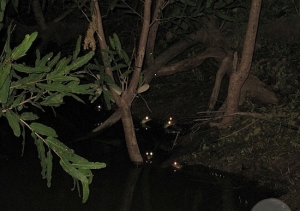 The next day we went Anaconda hunting. Which sounds tarrying as most people hate snakes. When we think of Anacondas we think of huge strong creates almost dinosaur size monsters, waiting to crush us and eat us whole. Actually, Anacondas here are not poisonous and generally scared of humans. We trampled through the wet swamps with our wellies on, looking for snakes. Worried we may stand on one or one make circle our legs. Again, uncovered from the blazing sun, we searched but to no avail. 2 hours we were out in the heat. Yet, don’t you just know it, as we got back to the sunset point, one of the ladies who runs the place mentioned to our guide she had seen an anaconda behind the huts. In, what seemed like a more bushy and long circular piece of grass, we found an anaconda slivering away. It was scared of us, taking photos, circling it as it moved direction. I got a close up picture thankfully before allowing it to wander off in the grass once more. 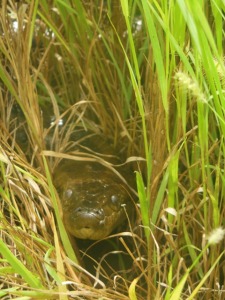 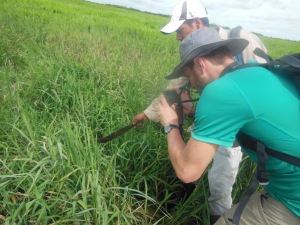 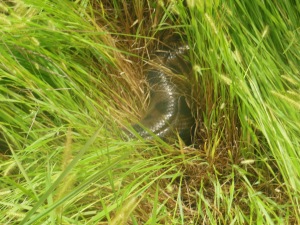 The afternoon, we playfully swang on a swing rope ino the water, then after a hammock siesta we went fishing. Piranha fishing. You know, Piranhas, them teeth filled fishes aggressively hunting for something to bite when in the water. I’ve been fishing before, and the waits can be tedious, yet you can a piece of line, put some meat on a hook and you will see the Piranhas go for it. You get a pull straight away. In fact, before we began fishing, you seen the ripples in the water at the Piranhas below. We managed to catch lots of Piranhas but let the 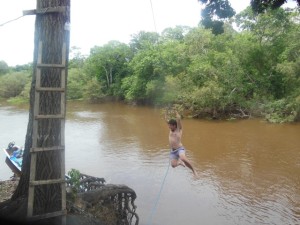 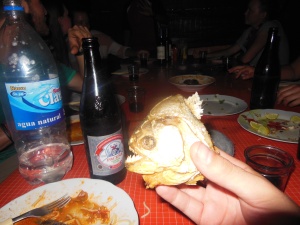 small ones go, and took 3 big ones back for supper that night.

The next day was our last. We rose up at 5am for the sunrise, and the dreadful noise which sounded like a struggling warthog, which was in fact a male spider monkey, as if he was creating a portal into a new life or echoing some kind of ritual. We went to attempt to swim with River Dolphins or Pink Dolphins. These were funny looking creatures. We managed to see a few only at the top of the surface, barfing up for air. They soon moved when more tourists came and the ripples of the boats and noises of the engine were close. 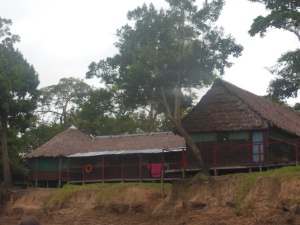 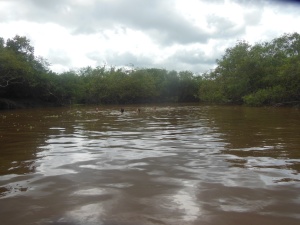 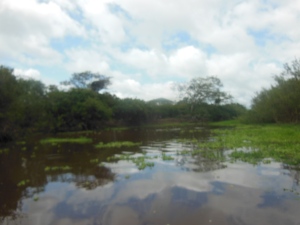 The way back we seen more of what we had already, and a very satisfactory tour came to an end. Lots to see, in a short space of time was the perfect entry for me to the Amazon. It was one of them insights which felt natural. Natural because of the vast amount of wildlife, just living there, similar to the Galapagos, un-phased by man. Almost like a Safari tour, but without the man-handled and made surroundings and creation. The Amazon truly is a wonder and full of some exotic and strange creates.

Amazon, I will be back. 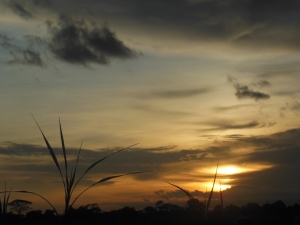