Imagine a world without WIFI? Ahh that got your attention. A world with little electricity, running water and modern facilities, where would this lead us back to? A world again made to fend for themselves perhaps. A world relying on mother natures choices once more I would imagine. A world more so connected to the natures and shore for sure. Well along comes Cabo Polonio. A small inhabited town on the coast of Uruguay, almost back in time and away from it all. You could imagine it being at the end of the world.

Cabo Polonio typifies Uruguay. No expectation, laid back and very sleepy. It’s refreshing really. We can travel thousands of miles to see some of the best historical and modern must see’s this world has to offer. Uruguay hasn’t really got that. It is what it is. And for that alone, it makes it a marvelous place. If you have backpacked yourself, having no expectation of a place, country or continent normally will make it ever so amazing to you. Everything is new and your mind isn’t relentlessly comparing it with what it actually is. That’s why getting off the beaten track can be so rewarding. Uruguay isn’t off the beaten track as such, but it certainly isn’t number one on the gringo trail throughout South America.

I was looking forward to getting into Cabo Polonio. Away from the high rise buildings, cars on the road and to be honest being online. The latter, you see everywhere now. Whether you are sat in an airport, a bar, a hostel or on the train, eyes are fixed on this piece of magic metal that does about anything electronically now a day. I’m guilty too, so when you have no option to check your smart phone to check the online world, life becomes a little less complicated and a little more real.

Getting into Cabo Polonio, it is now deemed a National Park. You can visit and stay temporarily, more in the season, but no more living installments can be built here. When at the entrance, you take almost like a monster truck of a 4×4 to the town itself. There are no roads, just sandy paths shaped for the trucks to transport passengers to and from. Green forestry with sandy ground are what you first pass through. It’s sizzling hot this time of the year, but it can get windy. When I passed through it felt like desert temperatures. As you chunter along, the ocean becomes in view and then the beach side. This is Sunset beach. To your left, the little settlement that you want to get to arrives. From a distance, it gave me the impression of an age old settlement. Think of when you may have watched movies set into the past, such as Iron Age times, or King Arthur times perhaps in England. Perhaps what history you have researched or read about. People were more on the move then, for various reasons from going to get food for the family or being forced out of their homes because of wars. This is what came to mind. It wasn’t exotic as such as you may think being in South America. It still had grass with sand beneath. It’s stand out point was the lighthouse. This gave it almost a British feel to it. This place was once a fishing village and boats would once sail by here.

The sun was setting as I made it by 8pm to the area. As we drove in, it was magical. There were custom designed huts, houses, dens, cottages and shelters of all different sizes and creations. The pursuit of creativity was certainly a priority here, and when you witness that, you know that freedom is here.This freedom is to express and conjure up accommodation or a home that represents the appreciations and interests in life. The tranquil atmosphere instantly caught on to me. I was naturally smiling with the release of any pondering thought behind me. I was in Hippieville to an extent, it was Zen.

As I walked to my accommodation, a guy offered my an Empanada his mother had made. Free food, yes please. Well until two dogs looked at me with dog eyes and I gave the rest to them. I arrived at my hostel and got checked in. My room signified the place once more. It was the attic of a very small hostel, tightly squeezed with 4 beds. The door I had to creep down under to get in. Yet the best of all, it was by the ocean. Last time I slept by the ocean was in Ecuador, hearing the waves come in at night. I forget how peaceful that can be. It brings an open aired breeze which certainly beats the tension of sleeping within streets and city buildings. I was back to nature and I felt at ease.

A German couple offered me some pasta they were making, whilst we drank some beers and wine. They had been together for 15 years and were only in their early 30’s. I remember thinking that was incredible and that true love does exist. A bohemian bunch of backpackers sat around from Uruguay, Argentina, Chile, Italy, Belgium, France, Sweden, German and me, the Englishman. Funny too, we all spoke English despite the number of different languages available to some. We hung out, under the incredible amount of stars above us. I mean, I remember being in Myanmar and looking up at the sky, and witnessing a glow of pearling shiny stars dotted around in formations and not, well it was the same here. The moon, lit up the ocean at around 1-2am that made it appear it was early morning and the sun was about to rise.

I decided to stay for two nights eventually with originally contemplating just the night. I dived into the ocean which was at a refreshing temperature. The breaks of the waves were big enough for surfers, which seemed to be a big attraction there. Sunrise beach we were now facing, to the left had relentlessly hot sand dunes. I took a walk in parallel with the oceans tip and then headed up to the dunes. The sun was screaming hot, yet the breeze of the wind from the sea extinguished any discomfort.

I walked through the markets and shacks, which has rasta men selling pearl necklace jewelry, stalls for art goods and clothes, with restaurants making the rest up. I reached the lighthouse to get a good view of the place. It was a really beautiful sight. Two beaches cocooning this settlement, the shacks and shelters dotted around in no particular order, and the ocean circling three quarters of land around us. Sea lions were sleeping on the rocks by the sea, horses were frock-licking freely in the grass farm areas, and people were slowly walking around socializing. It was a small community so to speak, with the influx of travellers like myself. It was life. 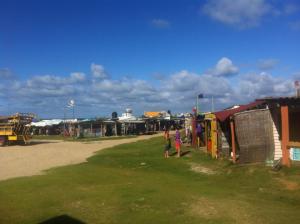 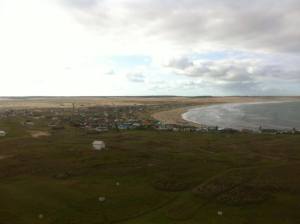 I met a really nice girl from Argentina who was staying at the hostel with us. She visited regularly for a break from the city of Buenos Aires. She was hippie like herself. She was vegetarian, she loved the ocean and she had unshaven armpits. This shows and is a testament to the freedom this place can have. Someone who can do as they feel and just be free. Free from any expectancy to look a certain way, or to feel guilty of any preferences they have with her diet. In her case, coming from Argentina where there is alot of meat eaten.

We gathered around for drinks and socializing again. We went to this small ‘nightclub’ so to speak which was basically a barn that people made music and danced too. It was cute and felt personal. After that I headed to sleep as the sun was due to come up. Waking up and leaving at 11am the next day, i was pretty tired. Normally, when you meet travellers it doesn’t take long to get one’s Facebook details. This time, it wasn’t about that. It was enjoying something in the moment, leaving fate to see whether we will bump into one another again, it was like the old backpacker times when social media wasn’t present and you really didn’t see some other people again. It was there and then and in the moment we were together, all alone, but as one then. In a world with freedom and little to expect. A place so naturally beautiful to this world. A place that many do not exist anymore. Eventually the hoards of tourists come, even when really, it isn’t even their kind of thing to enjoy, but they still do of fear of missing out or being sheep. Well this place isn’t for sheep. It’s for people the freedom, having attributes of individuality, being away from the modern world and what society nowadays is. This place is going back in time. Cabo Polonio, a settlement at the end of the world. 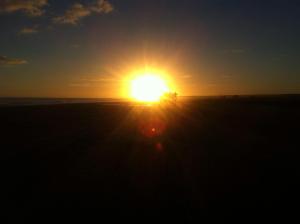